Welcome to the February 2020 edition of the Havoc Studios newsletter! Some of you may be receiving this via email as this is our first newsletter after Kami Con 2020. If so, thank you once again for stopping by our booth; we are so excited to share Havoc Fox’s development with you all!

This month, we brought Havoc Fox to our first convention: Kami Con 2020 in Birmingham, Alabama.

For two days, a special demo of Havoc Fox was available in the game room at Kami Con. A plethora of business cards and signup slots for this very newsletter were present at our demo booth, presented with a large banner to advertise our place within the crowded room. We had planned to give away free stickers as well, but difficulties with product shipping prevented this from occurring. Look forward to them at the next convention! 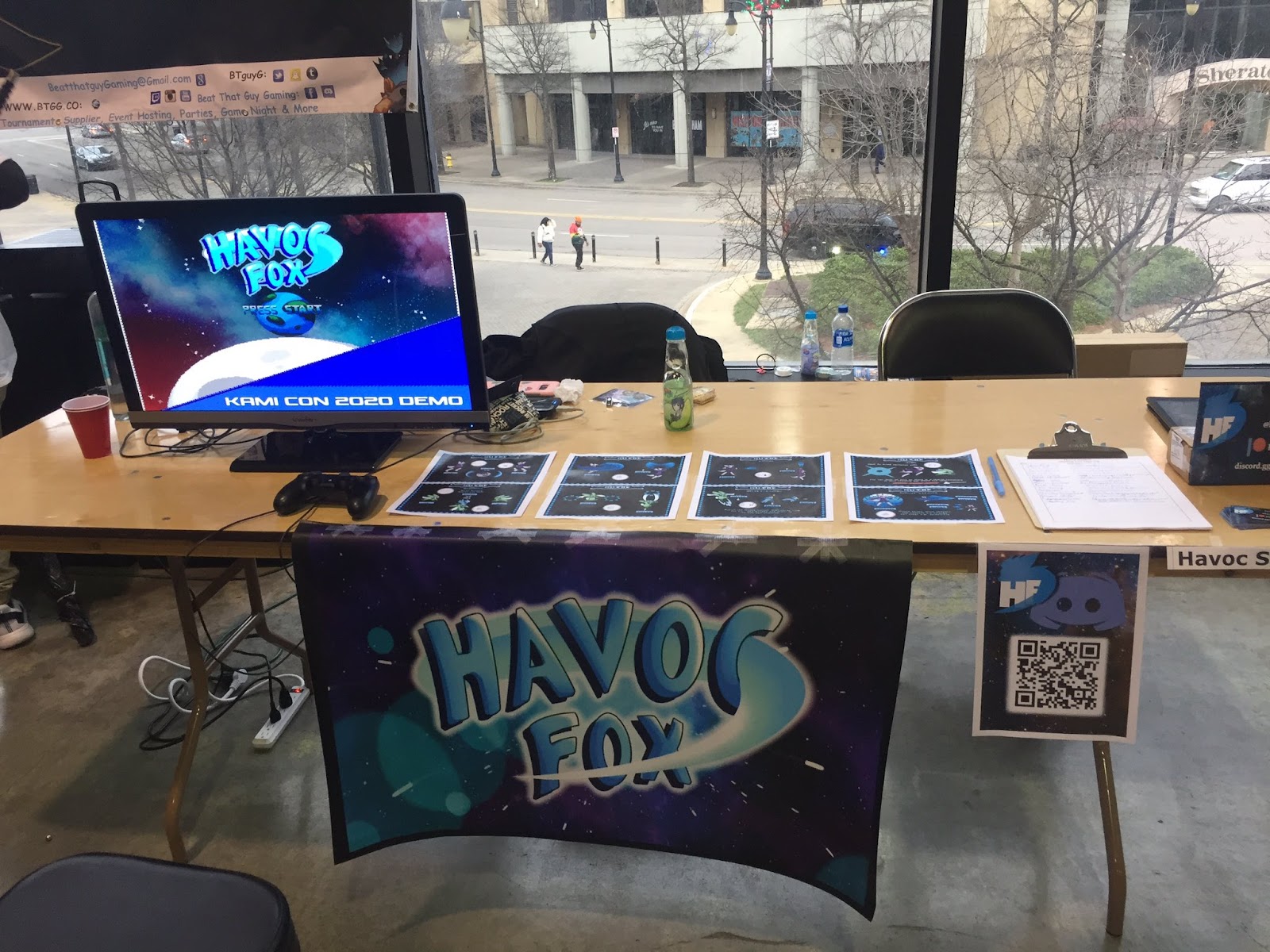 Overall, we consider our demo booth to be a success! We received plenty of feedback on Havoc Fox, expanded our presence through informational cards, and built up our mailing list which will be used to send out this newsletter and other information. We have learned a lot about operating a convention booth as well, and are excited to plan out future convention appearances! Thank you to all of you who stopped by!

With the newest demo behind us, we’ve shifted focus to redesigning and expanding other stages. This month, Moonlit Cove and Aqua Rocket Base have received major overhauls to stage layout and environment design. 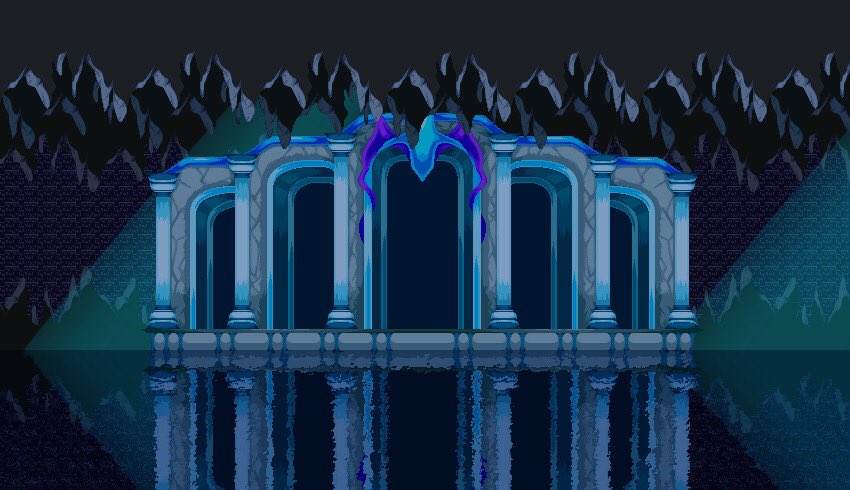 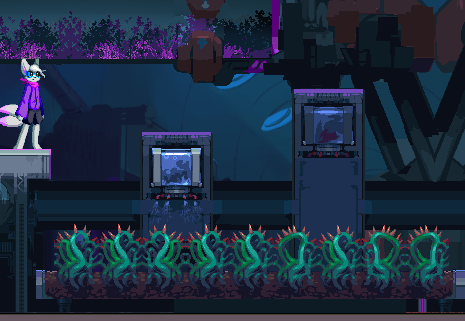 While Moonlit Cove still has its rocky appearance, temple ruins have been added to the stage. While mostly for beautification purposes, the second half of the stage is undergoing a complete makeover, and this new theme may play a role in the redesign. Aqua Rocket Base continues to receive improvements as well, this time focusing more on the underground segments during the second half of the stage. Replacing the cave appearance is a look at what might be seen beneath such a location. Plants and fungi have populated the stage’s lower levels, offering a more exotic, abandoned feel to the area. This part of the stage is still in development, however, and as such is subject to change at any time.

Lastly, we have new water effects! As you can see in the above image, the water in Moonlit Cove is now animated in a manner that resembles rippling water. You can expect to see a similar effect in future stages with large water background assets as well!

Every month, we highlight a member of our community that stands out and makes a positive impact. This month, we turn our eyes to Saucy and his game “Meta Fox!” 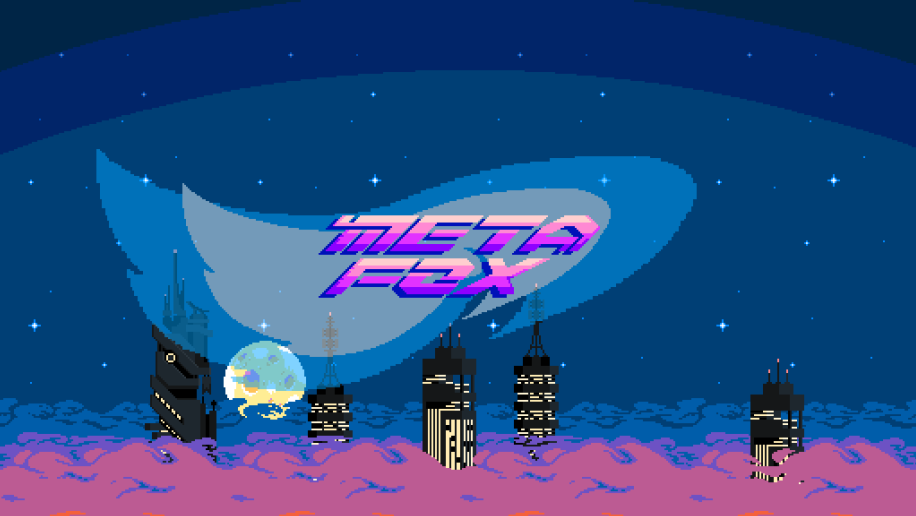 Saucy has been a member of the Havoc Studios Discord server for a little over a year, finding us through our posts on Twitter about Havoc Fox’s development. Saucy is a game developer as well, having worked with game design over the past five years. He is currently working on his game “Meta Fox” (working title), which is a 2D platformer in the style of Sonic. Game development is hard work, but Saucy says he finds encouragement through the Havoc Studios community, and that watching the development of Havoc Fox (and other games discussed on the server, such as Starbuster) inspires him to put forth his best effort.

Give Saucy some love! You can find him on Twitter and in his Discord server for his development.

One last note: in our first newsletter, we showcased Proto and his game Starbuster. This month, an official Twitter account was set up to discuss and promote the game! Check it out!

That's all for now!

February has been a very exciting month for us! Between the game’s updates, our first convention appearance, and releasing a new demo, we’ve had much to celebrate, but our journey doesn’t end here! If you haven't already, be sure to follow us on Twitter @havocfoxgame. Join the conversation and wreak havoc in the official Discord server: http://discord.gg/havoc-studios. Support us on Patreon! Check out the official Havoc Fox soundtrack on YouTube!

Thank you for reading the February edition of the Havoc Studios Newsletter. We hope to see you again in March as we welcome Spring!